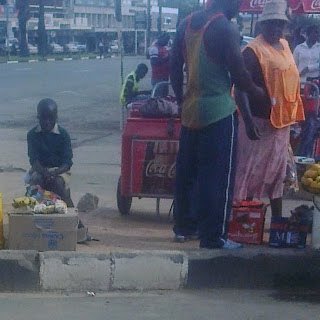 Renowned poet from Masvingo Tatenda Chinoda popularly known as “Dhege”, has urged the government and the local authorities to study consumer behaviour before they take action to flush out vendors from the streets.
In an interview with Tell Zimbabwe, Dhege said that the country’s economy is not conducive for formal work force since there has been unprecedented company closures and massive retrenchments which left many people venturing into the informal sector.
Dhege added that the vendors who have their wares displayed on undesignated areas have moved to those areas because they are following consumers so as to make huge sales.
“The government should not evict vendors like that without considering the circumstances which led to their occupation of the pavements and corners in CBDs. They must put ideas on the table and choose the best card to help the people in the streets,” said Dhege.
“The reason why the vendors have moved into the CBD is because they are following consumer behaviour since the designated places are not favourable for consumer behaviour. If the local authorities can address the issue of consumer behaviour then they can move the vendors,” added Dhege.

Vendors including school children captured selling their wares in Masvingo city centre
Dhege said that the government should reach a compromise with the vendors so as to support the thrust of the Indigenisation policy.
“The government should consider whether the eviction of vendors is the best route to take especially when we are looking at the indigenisation policy. The vendors are the ordinary man who have been affected by the economic hardships and trying to earn an honest living form selling their wares on the streets, it’s either that or the government create employment for them,” said Dhege.
In his effort to defend vendors, Dhege has since lanched a poem which attacks government over ill treatment of vendors. The poem has taken the social media platforms by storm.
The poem highlights the importance of consumer behaviour when it comes to designating markets for the vendors
Part of Dhege’s poem reads, “Regai tishambadze pedo neconsumer behaviour veduwe-e zvitengwe. Kumatenganyika kwamunoda kuti tiende uko hakuna consumer behaviour inouyako”.
The poem points out that in South Africa, Zimbabweans are being victimised by Xenophobia and when they come back home where they are being victimised again by the authorities who want to send them to areas where there are no consumers.
“Mzansi neukuwo yorodza pfumo rexenophobia pfumo reropa…Tongopunyaira sevanhu vanhu vanodya sadza vachiseva nyuchi mhenyu. Haa-aa Nehanda Nyakasikana tireverereiwo tirambe takadaro, tichidzimura moto wodai kupisa tsapi yorukweza,” reads part of the poem.local