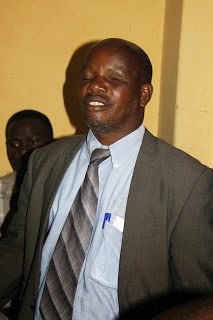 Spare a thought for the blind

Share
Facebook
Twitter
Pinterest
WhatsApp
By Golden Maunganidze
Media Institute of Southern Africa (MISA) officially opened the Masvingo information kiosk on Tuesday last week. The kiosk which is housed at NANGO southern region office is meant to assist the general residents in accessing information in Masvingo. For the past few months, a lot of people who were going to the kiosk in order to read newspapers confess that the project is noble.
“We can now read all newspapers that we want every day. Some people are not able to buy all newspapers but now we can just come here and read newspapers. Even if you are not in town on Sunday, you are guaranteed that when you come, your Sunday Mail will be waiting for you here,” said Anold Batirai who frequent the place.

Timothy Mudarikwa
A lot of people shared the same sentiments.
Speaker after speaker at the official opening ceremony showered praises on MISA for the noble idea. The guest of honour, Reformed Church University (RCU) Vice Chancellor Professor Wiseman Magwa who spoke from his heart said there was no need for over emphasising the significance of an information kiosk since any sane person would agree that opening of such centres is critical in any democratic society.
“Ladies and gentlemen, this is a very noble initiative which is going to assist the people of Masvingo to make informed decisions,” said Prof Magwa.
Prof Magwa went on to challenge various organisations in attendance to submit all information which they wanted the Masvingo community to know. He said the kiosk should be an information hub which will be able to assist the in building of a knowledge bank for Masvingo.
“All organisations must bring their promotional material here for public consumption. Even colleges and universities around here must be at the fore front in bringing their promotional materials so that everyone would get to know what happens at our companies,” added Prof Magwa.
However, standing in for Zimbabwe Association for the Visually Handicapped (ZAVH) Mr Timothy Mudarikwa said the media fraternity and all stakeholders should spare a thought for the blind.
As I see it ladies and gentlemen, Mudarikwa’s comment should not be taken lightly. He went on to say that in as much as the general public complain of reading just one newspaper per day, the visually impaired can not be able to read even one newspaper in a year.
“Have ever thought of us? When you read one newspaper per day, we can’t even read that one in a year,” said Mudarikwa.
As I see it ladies and gentlemen, it is now high time  that the government should start thinking of reaching out to the visually impaired. I am sure that the energetic Information Minister Prof Jonathan Moyo need to be advised to re-direct his energy towards improved access to information by all. Although it might be expensive for the government, I believe it is critical to have a few copies of national newspapers to be translated into  braille format.
It might sound illogical but if we treat one another with respect, we should start to think of ways of disseminating information to those visually impaired. In some countries, the visually impaired easily access information because there are a lot of alternative sources of information. However, in Zimbabwe we have very few alternative sources of information hence the need for us to think of a newspaper in braille. It was probably going to be better if we had a lot of radio stations but our current situation is pathetic – we do not have even one community radio station in the country and most parts of the country do not receive radio signals. It’s good for the government to take its time (in any case governments are known for that) but I think we need to move faster in making sure that everyone can access information. All we need to do for now maybe is to have a few copies in braille which can be distributed to various strategic points in each and every district throughout the country. We can have a sizable number of copies going to centres like Copota school for the blind. As I see it ladies and gentlemen, this project is long overdue. I repeat, let us spare a thought for the blind!!
Local