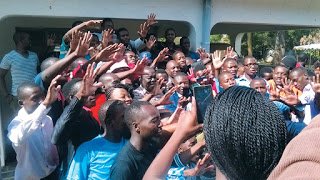 …bemoans poor social, educational standards at varsities
Upenyu Chaota
The Movement for Democratic Change (MDC-T) leader Morgan Tsvangirai bemoaned the collapse of social and educational standards when he met Great Zimbabwe University (GZU) students at the party provincial offices in Masvingo last Sunday.
Tsvangirai castigated President Robert Mugabe and his government for failure to improve students’ welfare and vowed to improve the social and educational standards of tertiary education in the country.
“The social and educational standards at universities have deteriorated like never before in the history of this country. University programmes being offered these days are not different from literacy adult education due to lack of resources and we want to transform that so that our institutions are well-resourced in order to deleiver quality education. We want universities to produce students that are compatible with the labour market,” Tsvangirai said.
“We are going nowhere as a country because the graduates we are producing every year are roaming the streets and they have no jobs. Our priority is to create jobs as soon as we get in government,” Tsvangirai added.
MDC students’ council treasurer, Cheers Chiutsi, told Tsvangirai that they are being suppressed by other students especially from Zimbabwe Congress of Students Union (ZICOSU) who are being financially assisted by some Zanu-PF members.
“Students are being robbed by being made to pay full fees while on attachment when they don’t use some of the things they pay for. ZICOSU members always disrupt our activities on campus and they overestimate their powers simply because they are being funded by some members of Zanu-PF. Recently we clashed with them when they tried to interrupt our meeting and some of our people were arrested. The university security and the police are biased so we have no security,” said Chiutsi.
He added that most tertiary graduates are not compatible with the ever advancing technological innovations of the labour market.
Tsvangirai said the future of the students is bleak if they do not stand up and defend their rights.
“When I was with the workers, Mashava was a thriving mining community and now it’s a university, what a contradiction. If you close a mine and establish a university, what are you producing? That is the problem with our economy, it’s not able to produce because it has been destroyed systematically by the Mugabe regime,” Tsvangirai said.
He added that the government should go back to giving student grants not as charity but as a demonstration that the government is investing in its future.
“It’s not an act of benevolence for the government to give students grants. Every university in the world gives grants to students so that there is no class distinction at institutions”, he said.
The meeting was conducted with riot police roving the vicinity.news