VMCZ engages citizens on how to file complaints in Masvingo 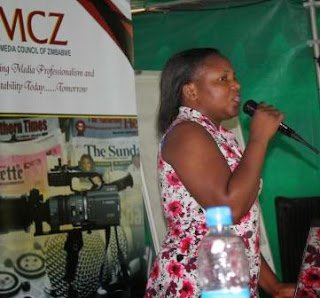 By Itai Muzondo
The Voluntary Media Council of Zimbabwe (VMCZ) has engaged citizens of Masvingo on how to file complaints against published news articles they feel have been wrongly reported or not apt for consumption by the public.
Masvingo United Residents and Ratepayers Association (MURRA) helped in organising the meeting which attracted over 40 residents from all wards in Masvingo urban.
Speaking at the workshop at a local hotel in Masvingo today (Wednesday), VMCZ Programmes Manager Faith Ndlovu urged residents to file complaints with her organisation whenever they feel that journalistic ethics were violated.

Faith Ndlovu speaking in Masvingo today
“An ordinary citizen can file complaints against publications you feel are wrongly reported or are not apt for public consumption. We lobby for retractions in such situations of  which I am happy to say that nine out of ten reported cases are effectively resolved,” said Ndlovu.
Participants were however of the suggestion that VMCZ should also go to rural areas and educated ordinary villagers on how to file complains. Participants also lobbied for provincial offices where they would easily go and file their reports.
“VMCZ should also target rural communities as the news trend in Masvingo has now penetrated the rural community. They may also have complaints against some publications,” said the participant.local
Share
Facebook
Twitter
Pinterest
WhatsApp
Previous article16 pupils hospitalised as classroom collapsed on them
Next articleThe Reformed Church University trains non-finance managers