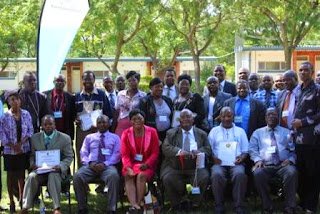 The Reformed Church University has reaffirmed its commitment to the development of Masvingo region and beyond through training non-finance making manager courses with a view to enable organisations to produce capital and curtail losses which they encounter.
The three day short course which sought to improve individual and organisation’s financial literacy was held from the 4th to the 6th of February 2015 at the Flamboyant Hotel in Masvingo titled Finance for Non-Finance Managers in a bid to motivate non-finance making managers to work hard and curb losses through good management of funds.
The Reformed Church University organised this short course programme to promote and develop organisations in various districts of Masvingo and beyond which are non-profit making, and to cultivate a culture of financial literacy that should see departments developing a host of financial and technological innovations through continuous improvements.
In a statement, one of the facilitators, the Chief Executive Officer of Regency Group of Hotels in Masvingo Dr. Fredrick Kasese, encouraged the participants to promote financial literacy and transparency within organisations as he said that, ‘The strongest competitive forces determine the profitability of an industry.’

Some of the participants who attended the training workshop

His argument was based on the issue of technological advancement era which the world is living in, through the use of digital technology, people can wipe-out money even in small amounts in the banks and at the end of the day the account holder don’t realise it because of ignorance.
The 21st century has been characterised by great technological innovations which should see organisations adopting the new systems to suit the competitive environment and development of new ideas given that technology is the great growling engine of change.
The facilitators pointed out the importance of financial literacy as one of the most critical factors determining the long-term success and survival of most institutions in Zimbabwe, which leaders must adopt and adapt viable marketing techniques to safeguard their companies.
The increasingly competitive marketing structure needs innovative minds to enhance positive economic environment since organisations are operating in a negative economic situation affecting the nation.
The strongest competitive forces determine the profitability of an industry
The Vice Chancellor of the Reformed Church University, Professor Wiseman Magwa reiterated the importance of the workshop and embraced the confidence that the participants conferred with the Reformed Church University  as he said that, ‘This workshop is a blueprint of other developments towards transformation which the University has laid down, in the pursuit of bringing back the Zimbabwean societies’ pride.”
At the end, the workshop participants were awarded certificates, to appreciate their efforts and output during the learning process.
The Headmaster of Margaretha Hugo Primary School for the blind, Mr. Manjere appreciated the financial management framework they received from the facilitators.
He said, “This workshop was very important, I am assured that if we implement the finance management techniques we were trained, we can make a difference as Non-Finance Managers at individual and organisational levels.”
The RCU promised to offer more courses for the development of the region and country in the near future.local
Share
Facebook
Twitter
Pinterest
WhatsApp
Previous articleVMCZ engages citizens on how to file complaints in Masvingo
Next articleGZU Launches Fundraising Campaign