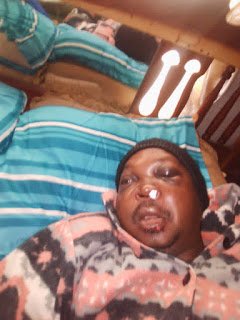 The
Zimbabwe Republic Police (ZRP) officer-in-charge at Zaka police camp has earned
public scorn after he allegedly beat up a teacher for allegedly violating the
Covid-19 curfew regulations.

As
the country is recording a surge in Covid-19 positive cases and deaths, the
police have been deployed to enforce Covid-19 regulations especially curfew
which is effective from 2200hours and 0600hours.

On
many occasions, police officers beat up curfew violators instead of arresting
them and Inspector Ronald Moyo turned Godwell Maposa, who is a teacher at
Chiredzi Primary School, into a punching bag.

The
incident is said to have happened on December 5 at Jerera Growth Point where
Maposa and his friends were drinking beer at Chademana bar.

Inspector
Moyo is said to have clobbered Maposa with clenched fists and booted feet all
over his body leaving him nursing facial injuries.

After
the attack, Maposa is said to have been detained at Zaka police station where
he spend the night only to be released the following day at around 1400hours
upon payment of $500 fine.

Inspector
Moyo professed ignorance over the matter when TellZim News sought him out for a
comment.

Masvingo
provincial police spokesperson Chief Inspector Charity Mazula said she was not
aware of the matter before referring all questions to national police
spokesperson Assistant Commissioner Paul Nyathi who said he was yet to get the
report.

Maposa,
however, told TellZim News that he was enjoying with friends in Chademana bar
at Jerera Growth Point at around 2100hours when the police vehicle arrived.

He
said they tried to chase people away but failed and they threw teargas
canisters in the bar and all the people went out.

“We
left Chademana bar when they threw teargas inside and we went to Matuda bar
which was close by.

“They
followed us there and told us that we were in violation of curfew regulations
despite it being before 2200 hours. I then told the police officers that we
were sorry and leaving.

“I
then looked into my rear-view mirror and saw that I was being chased by the
police truck which blocked me and I stopped.

“They
pulled me out of the car and started pushing me around. Moyo and his juniors
whom I could not identify started beating me up with fists and I fell to the
ground. They kicked me while on the ground and I started bleeding from the nose
and mouth,” said Maposa.

He
said he was then thrown into the back of the police truck before being detained
and fined the following day and given a police report to go to the hospital.

He
said the doctors found out that his nasal cavity was broken and needed to be repaired.