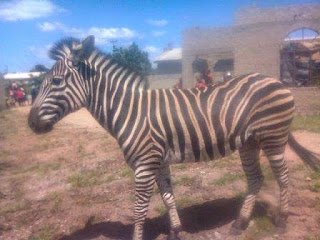 Kennedy Murwira
A lone zebra strolled down the streets of Runyararo West on Sunday morning and ended up entering the Ambassadors For Christ Church courtyard where the crowd which gathered to look at the animal nearly disrupted the Sunday service.
Residents of Runyararo West who spoke to Tell Zimbabwe said the zebra entered the residential area in the early hours of Sunday morning from the bushy area that lies west of the suburb but is south to Victoria Ranch.  A crowd of people soon gathered and the zebra was forced to enter the premises of the Ambassadors for Christ Church along Mboroma Street in Runyararo. The residents said for several days last week two zebras had been seen browsing around the cultivated plots on the edge of the suburb. Some of them said zebras had become a common sight on the outskirts of the residential areas to the north and west of the town.  It is believed that the zebras belong to the Mushagashe Game Park on the outskirts of Rhodene suburb which belongs to the Masvingo City Council.
“I saw two zebras on Thursday last week and they were browsing close to my cultivated plot. I believe that this is one of the zebras which lost its partner and ended up wandering into town,” said Tandavanhu Munyaradzi.
Innocent Chikwira said the appearance of the zebra in the residential areas was most probably an omen that may not augur well for the city.  He said it was not an everyday occurrence that a zebra could walk down a street right in the middle of a crowd of people, something which was corroborated by Gilbert Chimombe.  Although the occurrence may have been uncommon it provided entertainment for the people of the suburb who spent the whole day trooping to the church to view the animal over the church’s incomplete durawall.  By late afternoon the zebra pranced about the church courtyard in apparent annoyance at the large numbers who had gathered and looked determined to gallop away.

Strange visitor … A zebra which strayed into town
A woman police constable, who was keeping watch over the stray animal said while the Wildlife Management Authority had been advised they had indicated that they would not attend to the problem since the animal in question belonged to the council.
Contacted for comment the mayor, Hubert Fidze, said he was going to investigate the matter.local
Share
Facebook
Twitter
Pinterest
WhatsApp
Previous articleMP Shumba denies dumping his constituency
Next articleCouncillors turn down ministerial plea