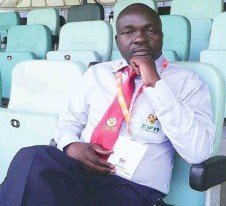 …battle
for vacant posts heats up

Eastern Region chairperson, Davison
Muchena confirmed the development and said they were putting final touches on
the logistics of the AGM.

“We lost two members last year, one
went to Australia and the other passed on so according to the constitution we
have to fill in those posts so we will be holding an AGM.

“According to the initial plan, the AGM
is slated for May 1 or 2. We are yet to decide on the venue but there are two
options, Masvingo or Mutare,” said Muchena.

The board lost Cryil Mukweva who passed
on last year and Simon Mushangwe who went to Australia.

Mukweva was the board’s vice
chairperson while Mushangwe served as a board member in charge of
Development.

Sources told TellZim News that Wisdom
Simba the current Secretary General is the favourite to land the vice
chairperson post.

However, other members interested in
the post are reportedly choosing to keep the cards to their chest and spring a
surprise at the AGM.

Mutare City football club (FC)
Secretary General Benjamin Chindima is also being tipped to replace Mushangwe
as board member in charge of development.

Simba had been reassigned to be the
acting vice chairperson and to the development portfolio while Farai Rutsvara
was assigned to the acting Secretary General post and also to be the board
member in charge of finance.

Meanwhile, the Zifa Masvingo province
Division Two board also has two vacant seats namely the board vice chair and
board member in charge of finance post.

The seats became vacant after the
suspension of Tinashe Gomba and Energy Zava last year over allegations of
defrauding four foreign players.

Dates of the AGM to replace these two
is so far not yet confirmed but sources claim something is brewing.

With Premier Soccer League (PSL) action
on the brink of a return in over a year, D1 football is reportedly set for a
month after PSL resumes and D2 following.