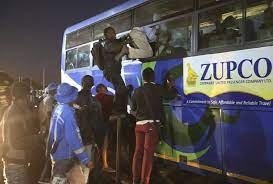 MASVINGO –
Monopoly public transport provider, Zimbabwe United Passengers Company (Zupco)
is feeling the heat of competition due to the resurfacing of pirate taxis and
kombis who are not contracted to the company.

Pirate
taxis popularly known as mishika-shika are now plying all local routes although
they were banned when the first lockdown was declared in March 2020 in response
to the Covid-19 outbreak.

Not
only pirate taxis have resurfaced but kombis too which are not under the Zupco
franchise are operating and charging a $40 fare for all local routes, an amount
equal to Zupco’s charge.

When
the Covid-19 lockdown was loosened, movement and the demand of transport
increased and Zupco has been blamed for failing to increase its fleet.

“I
cannot comment much about the issue but all I can say is that those are blue
lies. We have the fleet which can cope with the demand here in Masvingo. What
is actually happening is that we end up withdrawing some vehicles because mishika-shika
will have flooded and commuters then ditch us for them,” said Zuweni.

The
police have also been blamed for failing to ensure that only Zupco-affiliated
transporters are on the road providing services.

With
pressure of a looming Covid-19 third wave, the police have been involved in
running battles with illegal transport operators but to little effect.

He
urged those who are operating outside the confines of the law to stop
forthwith.

“We
are making arrests and cars are being impounded on a daily basis. Those who are
pirating should stop immediately and follow what the law dictates because we
won’t hesitate to pounce on them,” said Dhewa.

Pirate
operators have been giving Zupco operators at designated pickup points a hard
time by offering quicker services since they often use smaller vehicles.