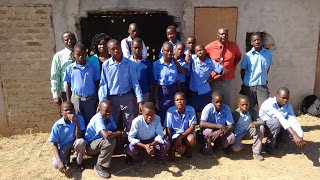 Some of the beneficiaries pose for a photo
“Amongst the many things that we do for the orphaned and vulnerable children, the chicken projects in many ways capacitate these children to be able to sustain themselves even in the absence of parents or guardians,” Mhungu said.
“After giving each school 100 chicks, we then encourage them to sustain the project, using the profits and some of the schools are now on the sixth batch since we started, “said Mhungu.
One of the beneficiaries of the poultry project, Chikarudzo Secondary School, which enrollment is dominated by orphaned and vulnerable children, has now implemented the project as part of the school’s agricultural department, and has since helped 84 pupils to pay part of their school fees.
Chikarudzo Secondary School headmaster Joyce Magara said the CBAP projects were bringing relief to the school, as its enrolment is dominated by vulnerable children, among them child-headed families.
“CBAP has brought relief to this school because our enrolment which has been previously affected by the burden of orphaned and vulnerable children is now in a better position,” Magara said.
“The children are now being given survival skills through the poultry project, which will enable them to take care of themselves even after they leave this school,” Magara said.
Pupils at Manunure High school said through the project, they are now assisting their community with the technical knowledge for broiler projects, as they now know better about the feeds, chemicals and bedding of the chickens.
“We are sometimes asked by people in the community how to best keep broilers and our advice is very effective, since we do it practically at school through the project,” said a pupil at Manunure High school.
Proceeds from the chicken projects are used to pay fees for the children, and at Chekai Secondary School, plans are afoot to start using the profits to implement a sewing project at the school, which will see to the provision of uniforms for the vulnerable children.
CBAP, which operates in 22 wards of Masvingo district and assists 115 schools , 34 secondary schools and 81 primary schools, helping nearly 11000 children altogether, also offers psycho-social support to these children during school holidays where they hold one week mentoring camps for them.
The organization has also been instrumental in bringing Antiretroviral treatment to clinics that could not easily procure it, but are now handing over the programme to the government.local
Share
Facebook
Twitter
Pinterest
WhatsApp
Previous articleChitima flea market now called Dr Grace Trade Centre
Next articleMan burns his dog over ten eggs