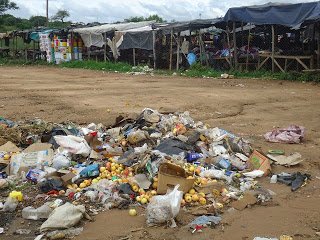 In a move dubbed by some as sardonic, ward eight Councillor, Against Chiteme on Easter Monday staged a clean – up campaign at Garikai flea market popularly known as Chitima  saying as the market had gone for weeks without garbage collection.
In an interview, Chiteme said the lack of Masvingo City Council’s attention to the looming health disaster at Chitima required the need for a clean-up campaign at the city’s largest fruit and vegetables market.
“This is a real health time bomb as referred to by the media in many occasions and is set upon my ward. I am forced to do this using my own resources because if for example a cholera outbreak explodes, it is my ward which is at risk,” said Chiteme.