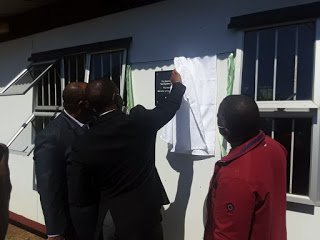 SRDC
are the system providers who designed ELLT for the Ministry of Transport and
Infrastructural Development.

He
said this at the Masvingo Vehicle Inspectorate Department (VID) depot where the
Minister of Transport and Infrastructural Development Felix Mhona launched the
system on Sunday, April 25.

“You
do not have to interact with people but you interact with the system; from
registration all the way to the invigilation and there are instructions in the
computer room from which you can learn how to take the test and it is very user
friendly.

“The
idea is to make sure that people actually study the high way code and
understand the rules of driving so that when they pass the test, they would
actually have studied and by that way we are eliminating poor drivers,” said
Mushosho.

He
said the system was very different from the manual processes of the past in
that the current system is fed with many questions from which the system
selects randomly for each test.

“The manual had a limited number of papers and
it was possible for candidates to be aware of the paper that they were going to
write and memorise answers but this system got a huge bank of questions; over a
thousand.

“The
computer selects at random the question that they will give you and the
questions will be different to the next person so there is no possibility that
you cheat or anticipate the questions.

“In
the past  because the manual was marked
by people there was a possibility that they could just pass a candidate or fail
the candidate but in this case, it is the computer that will determine if the
candidate has passed or failed based on the quality of the answers provided,”
he said.