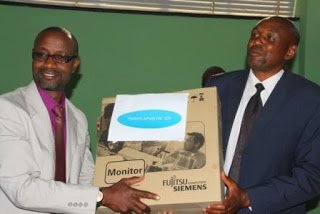 Masvingo Mayor Hubert Fidze on Tuesday handed over a donation from Kenern, Masvingo’s twin city, comprising of Information Technology (I.T) equipment given to council schools and clothes to Bondolfi Mission Secondary School.
The donations that were officially handed over by Fidze to Masvingo city council’s six primary schools comprised of three sets of computers and a printer for each school and clothing stuff for Bondolfi.
Speaking at the handover ceremony Fidze said they were honoured to have friends like Kenern and hoped to return the good thing done to the city when the Germans come to Masvingo on a date yet to be announced.
“We are delighted to have friends like these… we were caught unaware with a surprise gift and we are very grateful”, said Fidze
“As council we hope to do the same to our friends whom we are expecting on a date yet to be announced”, added Fidze.

Mayor Fidze (left) handing over the donation
Shakashe Primary School Development Committee chairperson Alderman Naison Tsere said the school is very grateful and the equipment will help the pupils with I.T skills from primary level.
“The donation came at the right time. It will be put to good use, through helping our pupils to be equipped with such necessary computer skills”, said Tsere.
Representing Bondolfi Mission Sister Katarina said, the clothes will be distributed to poor students at the school.
“Our friends from Germany have helped us a lot and the donation will help orphaned and vulnerable pupils at the school,” said Sister Katarina.local