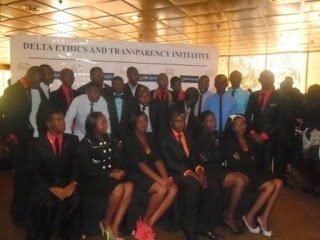 BY TINASHE TIRIVAVI
Great Zimbabwe University (GZU) Building Opportunities On Student Talent(BOOST) ENACTUS team in partnership with Delta Corporation has engaged the Masvingo community in an intensive campaign to try and flash out underage alcohol abuse.
The Corporate Affairs manager for Delta Corporation TsungieManyeza said in her presentation at the launch of the 2015 Delta-BOOST Ethics transparency initiative, that the company’s 88% market share calls for the need to educate the community about risks involved with abusing alcohol.
“Delta holds a market share of 88% percent in Zimbabwe and whenever there is an alcohol related accident people usually blame Delta, because of this we have seen it necessary to partner up with organisations like BOOST ENACTUS who work with students where these cases are common in our campaign against alcohol abuse” she said.
Munyeza expressed that underage drinking and consumption of alcohol whilst driving has affected many people’s lives thus there was need to encourage it’s wise consumption and prohibit youngsters from doing so in any possible way.
Monitoring and Evaluation officer for GZU’s ENACTUS team Graham Kembo said they have welcomed the opportunity to partner with the company since they were also making efforts to address this issue.
“We are pleasedby Delta’s initiative since it taps into current challenges that we are facing as youths which include underage drinking of alcohol,” he said.
“We believe it will change many lives,” he added.

In its efforts the ENACTUS team came up with a Facebook page “GZUABOVETHEINFlUENCE’ which received an appeal from a lot of people particularly students.
However in defiant to this some students based at the university’s Mashava Campus said they will continue consuming alcohol especially the one being brewed in the surrounding villages.
“We usually go to the community particularly “KwaPeter” where we buy 5litres traditional liquor for $1,” said a student identified himself as Djaboski
This is the second year DELTA -BOOST ethics are running under the theme above the influence – campaign against alcohol abuse.local
Share
Facebook
Twitter
Pinterest
WhatsApp
Previous articleHIP-HOP SENSATION ‘THE MONKEY NUTS’ HITS SOCIAL MEDIA BY STORM
Next articleMasvingo Senator says government not willing to reform media laws