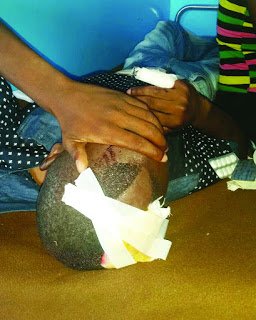 Kudzai Matava
Gutu married cop Shawman Mahuda will live to rue the day he was caught by his matrimonial wife stark naked in bed with another woman in Hwiru residential area last week.

Mahuda who was severely beaten by his wife Florence had to be rushed to Gutu Mission hospital where he is receiving medical attention.
TellZim News was informed that it all started when Florence had some misunderstandings with her hubby to the extent that she would lock him out of their house leaving him without an option besides looking for alternative accommodation whenever they quarrelled.
Luck ran out for Mahuda last week when Florence received a tip from a friend who informed her that her husband was having quality time at a ‘small house’ ‘s place’.
Florence tracked her husband until she caught him right in the act with a lady identified as Memory Rukava. Florence used firewood to beat both Memory and Mahuda.
Speaking to TellZim News, soon after the fracas, Memory said she had a long relationship with Mahuda who would call her whenever he wanted to have sex with her.
“Shawman and I had an affair for a long time and whenever he wanted to have sex with me, he would call me anytime just like what he did before he came here. He called me this morning telling me that he was going to come to my place as usual and when he came, thirty minutes after his arrival I heard a knock at my door and a voice telling me that it was Shawman’s wife.
“I opened the door and that is when Florence slapped me several times before she went on to beat her husband with firewood until it broke into pieces. However, Shawman’s wife made me realise that Mahuda’s real name was not Tapiwa but Shawman,” said Memory.
Mahuda threatened TellZim News with unspecified action if they dared publish the story. He used unprintable words as he threatened this reporter.
Share
Facebook
Twitter
Pinterest
WhatsApp
Previous articleTsvangirai slates 5 rallies for Masvingo
Next articleN. Richards manager in over $300 000 scam