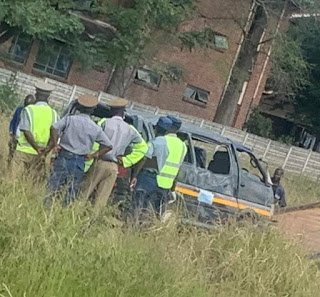 MASVINGO- The crash of a Rujeko
bound Zupco commuter omnibus which occurred on Wednesday, March 17, claimed one
life while 17 others were injured, after a tyre burst near Masvingo Polytechnic
College, TellZim News has learnt.

The
deceased Abigail Chidanhika died on the spot after sustaining multiple head
injuries when the commuter omnibus burst its front tyre, veered off the road
and overturned before landing on its roof.

“A female adult Abigail Chidanhika (34) died
on the spot due to multiple head injuries and the other 17 were seriously
injured and taken to Masvingo provincial hospital.

“Chidanhika’s
body was taken for post mortem. Investigations are now underway and cause of
accident will be confirmed soon,” said Dhewa.

Eye
witnesses allege the kombi’s front tyre burst and the driver failed to safely
stop the vehicle leading to the fateful crush.

“I heard a loud sound which sounded like a
tyre burst. The kombi started swerving and it rolled once and landed upside
down,” said an eye witness.

Zupco
has for long been castigated for contracting vehicles which are not roadworthy
thereby risking lives of unsuspecting passengers.