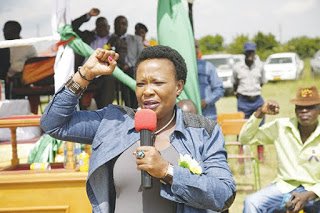 Tellzim reporter
Vice President Emmerson Mnangagwa’s wife, Auxilia Mnangagwa, who is also legislator for Chirumanzu-Zibagwe constituency, puzzled many people after she donated a goat to thousands of congregants who had gathered for the ordination of six Catholic priests in Driefontein.
People expressed various sentiments on Mnangagwa’s ‘gesture of generosity’ with some saying the VP’s wife should have given more considering her status.
“Sometimes you may be cursed by God for pretending. Those with a lot should give accordingly. Her constituency, for your own information, is dominated by Roman Catholics and they voted for her.
It therefore becomes a mockery to be given a mere goat by a person of her social standing. She has failed to distinguish herself from the ordinary villager. Maybe it shows how stingy and selfish those who aspire to be on the uppermost top are,” said a Zanu-PF official who requested anonymity, saying Mnangagwa should have taken a cue from Grace Mugabe’s fabulous charity work.
Others, however, were of the view that her minuscule gift should be taken for its symbolic meaning and not its material value.
“Remember what matters is the heart. Jesus applauded that woman who gave just one coin over others who boastfully splashed their wealth,” said one sympathiser.
The consecration of the new priests was presided over by Apostolic Nuncio to Zimbabwe, His Excellency Archbishop Marek Zalewski who was representing Pope Francis.
Archbishop Zelewski thanked Bishop Xavier Munyongani for his hard work and commitment in running the Diocese of Gweru and praised church members for their commitment to work.
“The year is not good at all but you can hardly feel it. The people are committed to duty and worshipping. This is what makes me remain attached to this diocese as I feel at home away from home,” said Archbishop Zalewski.
The new priests are Leon Tawanda Mapfumo, Dominic Dhekeni, Tafara Musemwa, Admire Gavi, Isaac Chirwa and Shingai Kudakwashe Nduku.news

He who said it can not be done must not disturb the one doing it!
Share
Facebook
Twitter
Pinterest
WhatsApp
Previous articleChiredzi tops in veld fires: EMA
Next articleBuhera RDC rids Murambinda of vendors